You know those times when a picture of a food looks so good that you are convinced that it is and it has become the ONLY basis for ordering it? Like, I mean, wala kang ibang feedback like from friends. As in, wala. This is one of those foods.

What really first attracted us to Vito’s was their packaging. I mean, look at it. It’s very vibrant and eye-catching. As with my previous 2 food reviews, this was discovered as a PASABUY in one of the food groups, I think. Basta, it was my sister who chanced upon this gem and ordered it AND WE ENJOYED IT!

We loved it in fact that we ordered it again just a few weeks after. I couldn’t find the post in Facebook so I Googled it and found their actual website. When we first ordered it, they only had 2 branches: Acropolis, Quezon City and San Juan and guess what? We still ordered it even if they had a hefty delivery fee but imagine my excitement when they finally opened in Paranaque. It became much easier, quicker, and even cheaper for us to get a hold of their amazing chicken barbeque. 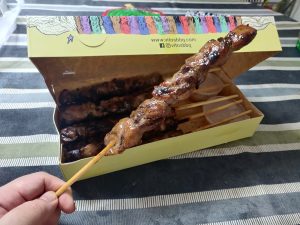 I’m sure they have more items in their menu but our regulars were always their boneless chicken thighs (the 4-piece box) and their 12″ chicken barbecue (the 10-piece box).

The thing is, I was never really a fan of sweet viands or ulam. I don’t know. I probably picked it up from my dad (+) who was never a fan of sweet ulam. Vito’s wasn’t too sweet but sweet enough to still be classified as barbecue.

I think what really got us liking Vito’s is the fact the chicken thighs were boneless. Imagine trying to bite as big as you want knowing that you’ll get nothing but chicken meat. Their barbecue was no slouch, either with around 9 inches of the whole barbecue stick was actual chicken meat. Oh, and the meat was tender and juicy. I would often pair it with rice but sometimes, d chop them up and put it between two pieces of bread, some onions, tomatoes, and their atchara then I would top it off with Samyang’s Buldak sauce (winner!) 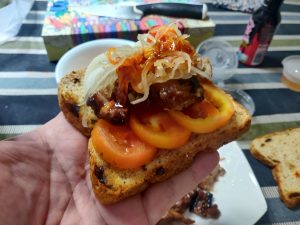 Another item that we liked was their chicken bao but unfortunately, the few times we tried ordering, they always ran out that’s why we transitioned to Hao Bao MNL (review could be found here.) Not saying that their baos didn’t taste good it was just that the few times we wanted to get some it was always out of stock so we resorted to getting our bao fix somewhere else.

Dare I say, this is better than Aristocrat (I know some of you purists will gasp at someone like me making such a bold statement so maybe another trip to Aristocrat should be in order). Given the availability of Aristocrat in Paranaque, Vito’s is a good contender at taking its place in the South.

What do you guys think? Do you agree with me or not? Any other chicken barbecue you think that could butt up against my contender? Hit me up in the comments below or in my socials.