This post is an immediate response to Jollibee FINALLY offering their Chick’nWich in the Philippines.

I find it funny that Jollibee offered the Chick’nWich in the US and not in the Philippines. I was like, “Hindi ba sa atin nanggaling ang Jollibee? Bakit nauna pa sila sa atin?” (loosely translated: “Didn’t Jollibee come from the Philippines? Why did the US get it ahead of us?”

I get it that a lot of the fast food spots around the world have unique menu items depending on the region on where they are at but the Philippines also likes a good chicken sandwich. Burger King has their Xtra Long chicken sandwich, McDonald’s has their crispy chicken sandwich, and KFC has their Zinger so I don’t get why Jollibee took this long to release the Chick’nWich here. 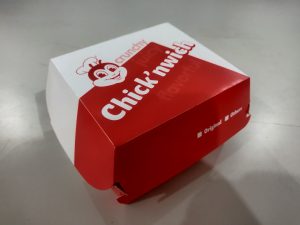 I’ve seen countless YouTube videos of Americans eating and comparing the Chick’nWich to their more famous competitors like Popeyes, Chick-fil-A, and McDonald’s and a good number of them praise the Chick’nWich which made me want to try the Chick’nWich even more.

I don’t know if I were just unlucky with the packaging where the print seems to be faded or if Jollibee was heading towards an environmentally-friendly approach but we are all not after the packaging but the sandwich inside.

Coming into this and also after seeing many videos and pictures of the Chick’nWich, I have to admit it kinda gave me some KFC Zinger vibes so I had to lower my expectations and not expect it to taste like the Zinger or else I might get disappointed.

Upon first inspection, I liked the fact that you are getting shredded chicken chunks on some crispy batter and not ground chicken shaped like a hamburger patty. It does look like the Zinger without the reddish color of the Zinger. It also had the same smooth bun similar to the Zinger. I was struggling so hard not to expect it to taste like the Zinger.

It smelled NOT like the Zinger (thank GOD!). It would then make it an easy reason why Jollibee hesitated to release the Chick’nWich here earlier.

The patty itself felt crispy and kinda looked greasy but it wasn’t. 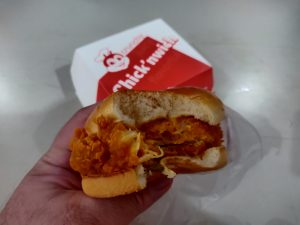 I hate to say it but it still does give me a Zinger vibe looking at it. It’s just  like a Zinger without their sauce which is a good thing. Now we have one thing that makes the Chick’nWich stand out. I personally liked the inclusion of a sliced pickle into the sandwich giving it a little tang added to the greasy chicken patty. Though I am not a fan of pickles, adding it to sandwiches has always been my go-to addition.

Now, depending on how readily available this would be would be a game changer for me because KFC’s Zinger is extremely hard to find. Not all stores carry them and the ones that do, don’t offer it often so if Jollibee will make it readily available, then I would easily have my Zinger alternative.

What do you guys think? Is this a good addition to the Philippine menu or is this inclusion is a little too late? Hit me up on the comments below or in my socials.